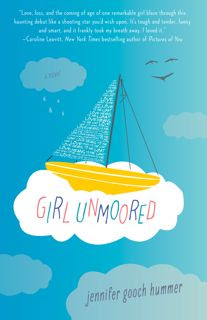 Available at Amazon and Barnes & Noble

Synopsis:
Apron Bramhall has come unmoored. It’s 1985 and her mom has passed away, her evil stepmother is pregnant, and her best friend has traded her in for a newer model. Fortunately, she’s about to be saved by Jesus. Not that Jesus—the actor who plays him in Jesus Christ, Superstar. Apron is desperate to avoid the look-alike Mike (no one should look that much like Jesus unless they can perform a miracle or two), but suddenly he’s everywhere. Until one day, she’s stuck in church with him—of all places. And then something happens; Apron’s broken teenage heart blinks on for the first time since she’s been adrift.

Mike and his grumpy boyfriend, Chad, offer her a summer job in their flower store and Apron’s world seems to calm. But when she uncovers Chad’s secret, coming of age becomes almost too much bear. She’s forced to see things the adults around her fail to—like what love really means and who is paying too much for it.
Excerpt Pg 188-189 in book.

At first Rennie didn’t see Mike, or M, or me walking my bike. But when she turned to say something to her mother, her face lit up. “Hey!” she said waving to Mike. “Mike! Mike Weller!” and came running over.

Mike stopped and smiled, keeping a hand on M so she wouldn’t fall over. “Hey, Rennie,” he said.

Her face turned neon pink, you could tell she was flattered he remembered her name.

When Mr. and Mrs. Perry saw the three of us standing there, they started toward us too, dragging Eeebs along.

“Mom and Dad, this is the Jesus, remember?”

Mr. Perry said, “Oh, of course. Pleased to meet you,” and held out his hand. Then he nudged Eeebs to do the same. “This is my son, Ebert.”

But Mrs. Perry crossed her arms. “Weren’t you the one who delivered the flowers this morning?”

“So how do you know Margie and Apron?” she asked through her tight mouth, looking over to me, standing on the other side of M.

“From Scent Appeal,” I answered, staring at Rennie. “That’s how we first became friends.”

“You’re Mike of the gays?” M asked, pulling her shoulder away from him. Her top lip was touching her pointy nose now.

Mr. Perry looked down, but Mrs. Perry kept staring at him with her arms crossed, and Eeebs looked horrified. I started to say something, but Mike’s glance told me not to. Then he turned to M and lifted up a smile like it was the heaviest thing in the world. “The very same,” he nodded.

M just stared, but Mrs. Perry uncrossed her arms and raised her eyebrows and said, “Well, I will say, you people certainly know your flowers.” And with that, she steered Eeebs away.

“And you have a great voice,” Rennie added, before following her mother.

Mr. Perry lifted his hand in a wave and when he turned away with the rest of his family, we all saw it: Mrs. Perry leaning into Eeebs’s ear to whisper something, and Eeebs quickly wiping his hand on his pants. The one he had used to shake Mike’s hand.

I looked at Mike, still hanging on to that smile, but barely. “I hate those people,” I said through my teeth.

Mike dipped his head at me and said as sad as the bluebird sings, “Then the cycle continues, doesn’t it?”

M broke the moment with a cluck. “Such the waste,” she said, starting on her crutches again, oblivious to what Eeebs and Mrs. Perry had just done. “You are too handsome for the boys.”

Mike grinned for real this time and started walking with her. “Well, if I had met you a little earlier things might have turned out differently.”

M looked at him with a big smile as a blush broke out on her face. And for the first time ever, I wanted to hug her.

Jennifer Gooch Hummer has worked as a script analyst for various talent agencies and major film studios. Her short stories have been published in Miranda Magazine, Our Stories and Glimmertain. She has continued graduate studies in the Writer’s Program at UCLA, where she was nominated for the Kirkwood Prize in fiction. Currently, Jennifer lives in Southern California and Maine with her husband and their three daughters. Girl Unmoored is her first novel. Please visit her at jennifergoochhummer.com.
at 10:01 AM

Lilac Wolf (Angie or Angela)
Michigan, United States
I'm a 40-something wife and mother trying to get back in the workforce while still doing the things I love.