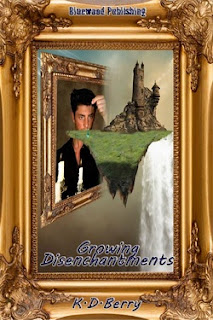 Available at Amazon and Barnes & Noble

Synopsis: (from K.D. Berry's website)
Just when he'd been looking forward to another quiet night delving into mind-bending arcane lore and mentally wrestling with the deepest magicks, along came this mysterious thief to disturb him. Why was it nothing in Ragonnard's life ever went to plan?

Rather than turn her in to the law (or into something else), the young sorcerer offers Ganfrey a deal – steal a portrait from the palace for him.

But it's no ordinary portrait. For 500 years it's been a magical prison for Syranax, the most powerful sorcerer in history. His enchanted Amulet was entombed with him, and Ragonnard wants it. More than anything.

In releasing the Amulet, Ragonnard unleashes a devastating sequence of sorcerous events, the like of which has not been seen for hundreds of years. And, no, things definitely don't go to plan.

Ned Merrivel is a time traveller from the future. His job is to sort it out when it all goes wrong and save the world somehow. If only he can find a pair of trousers first.
I was so excited to see another installment of the Adventures of Drewdop. Okay that's not what it is but I do adore that character. He's an illusionist who is very smart, much smarter than the king, but he makes bad choices because he is still human. He gets himself into a real pickle in this one.

Ragonnard isn't really an evil sorcerer he just wants this magical tool so bad that he makes the worst decisions. Even his furniture gives him grief about his lack of forethought and planning. Ganfrey helps him get the painting and then it all goes to hell. Silly Ragonnard!

It's really quite the fantastical adventure! I love King Credos who is a bit if a bumbling idiot, but has such a good heart. Every time he throws a party it's not just for the rich people, he invites everyone in town, all his servants...he doesn't discriminate. I think it would be better to have a ruler like this than the ones who think only money matters. Of course it helps that he has such a good adviser in Drewdop.

This book had quite the adventure, and you'll be hard pressed to put it down, especially toward the end. What really tickled me though was all the fairy tale spots. Like Ragonnard is the "Sorcerer's Apprentice", you know, the one with all the brooms? He made all of his things sentient, so they resembled Beauty and the Beast. The evil queen's magic mirror even made an appearance, and what an appearance! It wouldn't give Ragonnard any information until he said, "Mirror, mirror on the wall, who is the fairest of them all?" and then the Mirror answered back, "Why thou art, my queen." Ragonnard was very frustrated by that, but I was LMAO.

They also had me using my dictionary in this book. Some words I've fallen in love with. Garde-robe, midden, alacrity and more. This is why I love my Kindle, just highlight a word to get the definition. Yes there are some big words, but it's a well written book, easy to follow and the story will suck you in. You will fall in love with all the characters, even Valesco, Drewdops demon-imp.

I'll leave you with this quote that was describing Ragonnard and Drewdop:


"Both of them knew they were being petty, knowledge that made them behave even worse."

Lilac Wolf (Angie or Angela)
Michigan, United States
I'm a 40-something wife and mother trying to get back in the workforce while still doing the things I love.